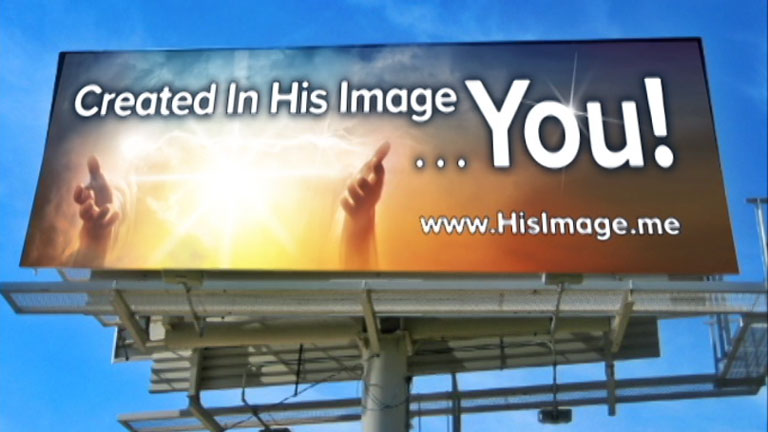 Restoring people to their true identity in God, through biblical awareness and education.

Our vision is that all people will awaken to who God created them to be.

The question, who am I, is getting louder and louder in our culture. There are many people, groups, gangs, and etc. trying to answer this question for people. Yet in God’s great love, He has already answered that question by creating us in His Image.

Someone might ask how will billboards help restore godly identity to the people of this country? Our answer is that this is a movement, HisImage.me which will be started with billboards, media, ministry, and education across the country. Every single movement in this country has started with a media and education campaign. Many of those movements using billboards. If the campaign was strong and successful, the group succeeded in drawing the minds and hearts into that truth, or deception.

Billboards are a highly effective way to reach people!

God is the one drawing minds and hearts to Him and truth now! In obedience to Him, we have launched this campaign empowered by the Holy Spirit, and with all His grace and strength needed to succeed in calling people’s hearts back to Him and their true identity in Him! Coca Cola marketers said we will put one in everyone’s hand across the whole world and they did. We are saying the same thing, that all people will receive the truth in their hearts and awaken to who God created them to be!

The Word of God says to, “put signs and guideposts up along the way, taking note of the way you go.” Jeremiah 31:21 These billboards saying, Created in His Image…YOU!, will be up on highways, where the largest volume of people are traveling. The billboards are connected to discipleship happening online through our website, a prayer hotline, and on the streets, ministering as the Lord leads in each city with the local churches.

“If you can meet the worth need, man’s deepest need, we can change history for that person and the community” (C. Owens). God wants us to return to Him, and who He created us to be. Even as He called Nehemiah to rebuild the walls of Jerusalem, and call His people “home” to receive His love, repent and live as sons and daughters of God, He has called us to rebuild a wall of true identity in this nation. “As a man thinks in his heart, so is he.” Intentionally learning and seeing oneself through the eyes of God will transform people’s lives and communities, and thus culture!

Partner with us NOW! Donate using the donate button below and please pray for this ministry to reach all those God has called us to reach.